Curse Of The Fallen 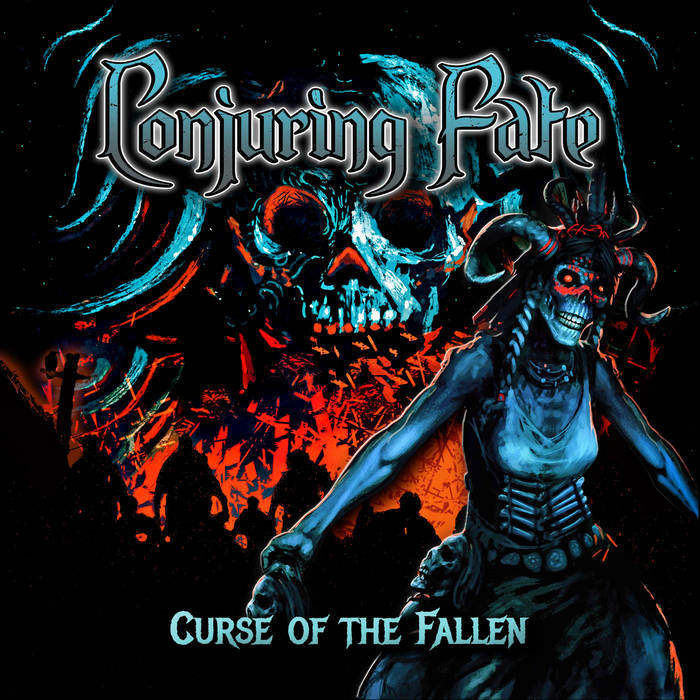 Conjuring Fate were originally formed in 2005 in Belfast, Northern Ireland. It took a while for them to find a constant line-up, so the first live gigs were not played until 2008. Founding member and guitarist Phil Horner is a friend of Sweet Savage’s guitar wizard Simon McBride. Former Sweet Savage drummer Jules Watson played drums for Conjuring Fate from 2011 to 2013.

“We all grew up on our daily dose of Maiden and Saxon,” explains Phil Horner what Conjuring Fate are all about musically. “Sound wise we are now situated in between NWOBHM and classic power metal.”

Following their 2014 debut EP “House On The Haunted Hill” and the band’s first full-length album, 2016’s “Valley Of Shadows”, the brand new record “Curse Of The Fallen” is about to up the ante once again.

“I believe this album ticks all the boxes,” smiles guitarist Phil Horner when asked about Conjuring Fate’s second album. “We really concentrated on making each song the best it could be. They are heavy, catchy, melodic, shredding twin lead solos, and Tommy has really shone through with a great vocal performance. We really wanted this album to pack a punch! There were so many song ideas going around. For me, I created one cool song musically, then I tried to beat that with each song I did after that. And I believe that worked. This time I mainly concentrated on music, leaving most lyrical themes up to Tommy and Steve.”

Along with the mentioned Sweet Savage and bands like Stormzone and thrashers Gama Bomb, Conjuring Fate are an integral part of the up and coming Northern Ireland metal scene. There is not better proof for this than their new album “Curse Of The Fallen”.

Track Name: Burn The Witch
Back to the woods again
Return our retribution
A twisted silhouette
Fleeing for a coven
Ancestral spirits trapped
Their lifeforce is the power
We must return her now
To the flame from where she cowers

Make no mistake
One day this evil will return
And we will stoke the fires
As we watch witches burn
Time will martyr murderers
Killed in the name of god
The crucibles of cavalries
Steeped in a witches blood
Track Name: Voodoo Wrath
I’ve got a feeling
That you hate me from afar
Pushin’ needles in a makeshift doll of me
You think salt circles
Will protect you from my grasp
But I am ancient ever-being

A hex of voodoo wrath won’t stop me
On my path to rage
Your future children will scream bleeding
And many miles away
In times of burning effigies
I will return to wreck my vengeance!
Track Name: Midnight Skies
I feel the tides of time are pulling me
Tearing me apart
We’re not long for this Earth
Accomplishments, look how far we’ve come

Don’t you see me cry?
Gravity is... pulling me down

It’s written in the stars, my destiny
Do they know who we are?
We’re just a flash in time, a speck of dusk
Live life while you can!

Don’t you see me cry?
Gravity is... pulling me down

Walk along this river
In the middle of the night
Under midnight skies
Contemplating sanity and vanity alike
Under midnight skies
Track Name: Journey's End
I’ve seen the signs
Heresy and prophecy align
The sun... the moon... the stars it’s time!
Devotions blind
We set a course to leave these shores
In search for kinder lands to find

Have you ever...
Seen a sunrise from a barren sea?
Heard whispers on the wind?
As it gently brushed your cheek
Have you ever...
Felt the earth move beneath your feet
And wonder, what lies out of reach?

Ride with the tides
Sail beyond horizons eye
Where the sun never sleeps
Where the valkryie fly across the skies
How I long to die free
Go out on my own two feet
My friend... this is our Journey’s End!

Betrayed by faith
A light screams in the night behind
As dread creeps in and rapes my mind
Is it too late?
I stare into the black below
The water or the gallows wait
Track Name: Daughter Of The Everglades
Lately I’ve been watching you from far way
Simple request and follow was all it took
My mind reads like your private book inked by your very hands
Pages turning inside my head as I remember you

And then you let me in, just like the rising sun
Your beauty overwhelming me, how could I let you go?
Our love drowned that day...
Down by the riverside, daughter of the Everglades!

Time has a funny way of painting memories
The dark lust and love steeped in jealousy
The last thing I recall of you, was your gargled screams
The icy water your eternal grave...
Track Name: Night Of The Knives
No one knows my name
But they play my game of hide and seek
When the sun sets low
And the moonlight glows on cobbled streets

Day turns to night, in a moment you fear for your life
With a wink and a smile, I’m just dying to see what’s inside
With a flick of this knife, a wound opens and spills out your life
You can run… you can hide…
No escape from the night of the knives!

Eyes of the alleyways, malpractice surgery
By gas powered lights
My hands are warm inside
Look up with lifeless eyes as fog engulfs my crimes
Track Name: No Escape
Live for today cause we can’t change the past
It’s such a shame
Some things weren’t made to last
Flawed by design
And given memories not mine
I’m just on borrowed time
This life was never mine
No never mine

Live for the days
When we are free to fly away
And not remain
A number with no name
Flawed by design
And given memories not mine
I’m just on borrowed time
This life was never mine
No never mine
Track Name: Children Of The Night
A bump in the night takes flight on wings of leather
Yellow eyes they hypnotize, he’s floating like a feather
Let us in... deliver me from evil, let us in... deliver me from sin

Rise up with new eyes...
Children of the night, bite down with your fangs!
Track Name: Original Sin
I walked the world when mammals left the sea
I reached an apple down and smiled from the tree
I showed man fire to watch him burn
And how I laughed as the tables turned
His empires crumbled to the ground

I am the beginning… I am the end
You invent religion to give you piece of mind
Won’t protect you from an evil of this kind
Malevolent... omniscient... I’m sentient
I travel worlds to break and crush... CRUSH!

Bandcamp Daily  your guide to the world of Bandcamp

Guests include Kassa Overall and Muriel Grossman, plus an LP of the week by Van Hunt.